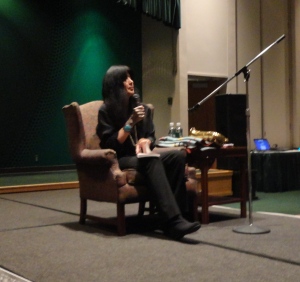 Last night, I was entertained by words. They were Joy Harjo‘s. She was at the NSU Ballroom in Tahlequah, and she read poetry, played songs on both the saxophone and flute, read from her memoir Crazy Brave, and shared her wisdom about writing, stories, poetry, and living the journey of life.

I just finished reading Crazy Brave last weekend. It is a short, fluent, plainly-spoken yet lyrical overview of her childhood and schooling and the path that brought her to poetry. When I finished the book, my first thought was: Well, this is Part 1 surely. I wanted to ask her that last night, but there was no time. However, she did confirm that the memoir ended where she had originally intended to begin it.

She said, “Crazy Brave took me fourteen years to write. . . . Most of the time I was running from it.”  She said she wanted to “walk around” her early years and instead “tell the story of after I started writing poetry,” but a “piece of art has its own spirit” and she wrote the book that the spirit required. I am working on a manuscript that combines memoir with poetry and deals, in part, with why I began writing poetry. While I have early memories of poetry, I am finding that most of what brought me to poetry was simply life experience, which seems to be part of Harjo’s point.

Harjo, also an accomplished musician, said that a record producer once asked her when they started a project, “What do you want to learn from this?” She realized that the question “What do I want to learn today?’ is one that we should try to always ask. What she learned from writing Crazy Brave was the power of children. “Children are part of the story though they don’t have power over it.”

Throughout the book, Harjo writes about the “knowing,” something she relied on to escape abuse from her step-father, “a powerful warning system that stepped forth when I was in danger.”  This force was “always right” and “stood watch over me.” Later in the book, she describes the knowing as “a strand of the divine, a pathway for the ancestors and teachers who love us.” Later, I believe the knowing becomes the poetry itself, the poem itself, and Harjo as a living poem. “I knew this is what I was put here to do: I must become the poem, the music, and the dancer.”

The heart is a symbol that runs throughout Crazy Brave, as it did through Harjo’s performance last night. Harjo said, “The heart knows everything.”

When I was a teenager, I wrote a series of poems called Knowing. There is something in a poem, a good poem, that feels like a knowing, like a living awareness. It is closest to the beat of one’s heart. It is the impulse to create that nothing can stop and that can often not be understood.

There is so much of our own lives, of our stories that we have lost, not through a failure of memory but through the lack of attention. Last night, Harjo said, “Sometimes we don’t even know our own stories” or “where we exist in the story matrix,” but “I got to Crazy Brave by accepting all of the parts of the story.” Helping her get to her story were some tough teachers. She said that native students are often given the toughest teachers, and she said, perhaps that is because “We know how to move through the world.”

The knowing that comes through spirit and heart is an awareness that walks with us on our path. Reading Crazy Brave, which seemed to have so many parallels with my life (though I am not native), and seeing Joy Harjo perform last night are helping me frame the story I am writing. I find a compassion and clarity in Crazy Brave that I don’t often see in memoirs; though it has a specificity of detail, its focus is on the moments of beauty and cruelty and bewilderment in daily life that shape a person. The story is not about how she was treated by others; it is about how she responds to the treatment and the continual nurturing of the creative spirit that dances a rhythm she must follow . . . and become.

P.S. Though she didn’t know that I have “Journey in Words” tattooed on my right arm, what she wrote in my copy of the book when she signed it was: For Shaun, May your journey be beautiful.

1 thought on “The Knowing Heart”

The museum is open every day from dawn to dusk.