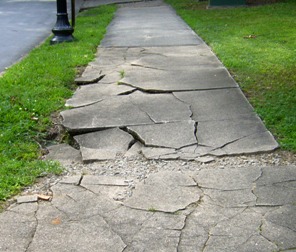 The park forty years later is still green half the year,
and empty, though its emptiness courses
from indifference rather than vandalism, created
by children no longer running barefoot down a hill.

I had to pass the bully’s house on the way
to the park. The house was patched together
with plywood and the weeds hid snipers
with slingshots and rocks big as my kneecaps.

Buddy and other boys with shortened names
burned branches and left beer bottles in the bathrooms
where pipes like stalagmites coiled in the air and words
festered in spray-paint on the pocked concrete walls.

It was safe in the heavy green darkness beneath
the sycamores, where the sweet clovers grew in patches.
“Sheep showers,” Kelly called them, and we shook off
the ants and ate them next to the corrupted see saw.

In May, the prison band played for Founder’s Day,
and the park swelled with bacon-fed bodies,
tsk-tsk women who declared they’d fix up the bathrooms
and overalled men on tailgates drinking paper-bag whiskey.

In the summer, along the forgotten picket fence
on the west side of the park, honeysuckles thrived,
and we made houses there, and we ate
the blossoms, pulling out the rich white center.

At the park entrance, a peach tree grew round
and fat, its veins pushing up the world around it,
though it never flowered. Each fall its leaves dropped
like curses on the busted sidewalk to the ruined world.

This is a revision of a poem posted on here before. I took out all the references to a dream in the earlier poem. The dream was one of the most vivid ones I’ve ever had and so I wanted to write about it. But really, it never quite went with the other thread of the poem–my memories of the town park in Locust Grove, where I grew up. I’m a bit fascinated by small town parks–so many of them have that equal parts decay and wonder that make them appealing to me.